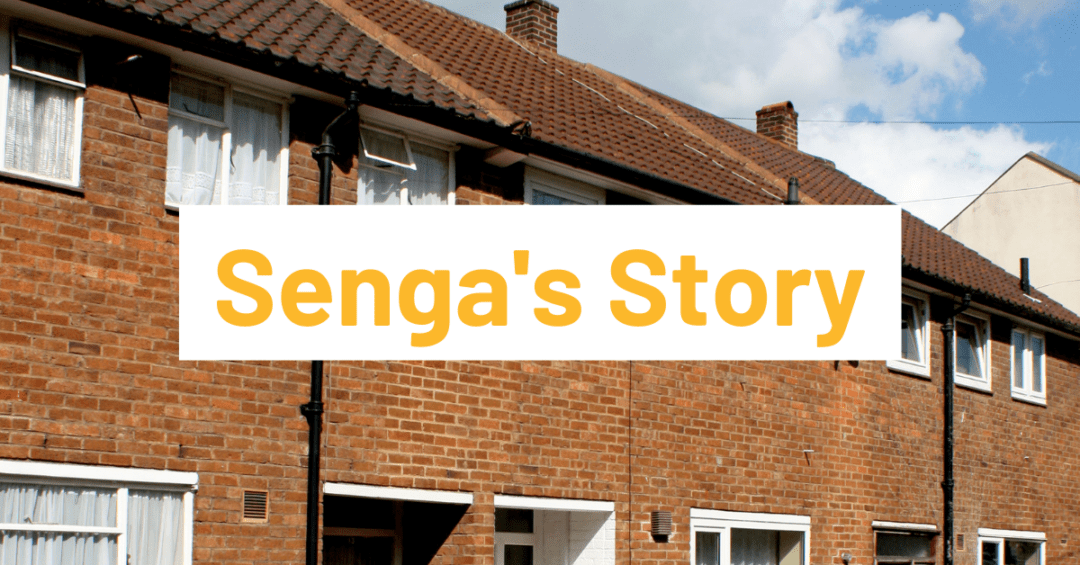 When an operation left her 12-year-old son unable to walk, Senga knew they could not stay at their old, now inaccessible house.

“It turned out he had Medulloblastomas cancer – five tumours, so on the 17th, March we got an operation that left him with posterior fossa syndrome which is like cerebral palsy. He couldn’t walk or talk. Things are slowly coming back but he still can’t walk, he’s in a wheelchair. We lived in a house that had six steps to get up to the garden part and then it was another four, so the house wasn’t suitable. We had to stay up in Glasgow in the CLIC Sargent House until they could offer us something.”

Ideally, Senga was looking for an accessible property with a bedroom and bathroom located on the ground floor in the area she and her son were already living in. However, most of the properties they were offered were unsuitable.

“The first time they offered me something in Springside which is four towns away. I’m a single parent and I thought ‘it’s taking him away from his environment where he should stay’. I’m happy to be anywhere but I was thinking of my son. He was twelve at the time, and he also has autism, so he has a small group of friends who tried to keep in contact at the time. I was hoping we’d be able to stay in an area which he knows and where he feels comfortable because he’s not gonna be able to get that support further away. Having to go out to a different town where he knew absolutely no one, there would be all these changes and he wouldn’t have a lot of people around and about.”

After more housing offers that were either inaccessible or would’ve taken her son away from his support network, Senga luckily found a woman offering to swap a council house on HomeSwapper. Although it was still inaccessible at the time, the house had a downstairs bathroom and bedroom that could be made suitable through adaptations, and would allow Senga’s son to stay at the same school.

“If it hadn’t been for the girl swapping me, I don’t know what would’ve happened. She approached me – she had two kids and this house and said ‘I’d be willing to swap so the wain can get housed’ and then we went to the council and they had to come in and have a look to see if they could adapt the house.”

Although the council agreed to have a sub-contractor do the adaptations, times were still very stressful for Senga.

“At the time when we swapped, my son was doing his last chemo and actually and ended up with septic shock. The last chemo couldn’t be given because he was too unwell, so I was juggling all these different things.”

“My son was in a bed in the living room until they had done the adaptation because the existing room was very small – you couldn’t have got a bed in, and the toilet door had to be turned around to open the other way because that’s the only way I could get him in to transfer him to the toilet, take the chair out and then be able to shut the door. We lived like that until they had done the extension. “

When, on top of this, she started struggling with the attitudes of the builders working on the adaptations, Senga decided to get in touch with Housing Options Scotland.

“I just felt as if they were kinda trying to half-heartedly do it, as if they were doing me a favour, but it’s my son’s need. And then I thought ‘please can I get help here’ and I was told that Housing Options Scotland might be able to help because my son has a disability. That’s when I got in contact with you because someone had said to me that ‘maybe they can help you a wee bit’.”

With the help of Housing Broker Jil, Senga was able to understand and navigate the system more easily.

“Jil came down and had some meetings with me. It was easier and if I had any questions, I would ask Jill ‘what happened here?’ and she answered me and helped me through things. I think she actually had communications with the council as well, at times.”

Now that the extension has been completed, she hopes that surgery will work for her son and “get him on his feet”.

“It would be good for his overall welfare. I know he has his wheelchair but it kinda limits him – it might not work, but he’s prepared for that, too.”

Senga’s advice to people in a similarly difficult position is to “try to find people who know all about your rights”.

“I had to deal with so much at the time and I just thought ‘I can’t do this’ so if you’ve got someone else helping you who knows everything such as yourselves… You’ve been giving me lots of advice, all the ins and out and the law, what my rights were, and you were there for me to help me fight my corner, to be honest.”