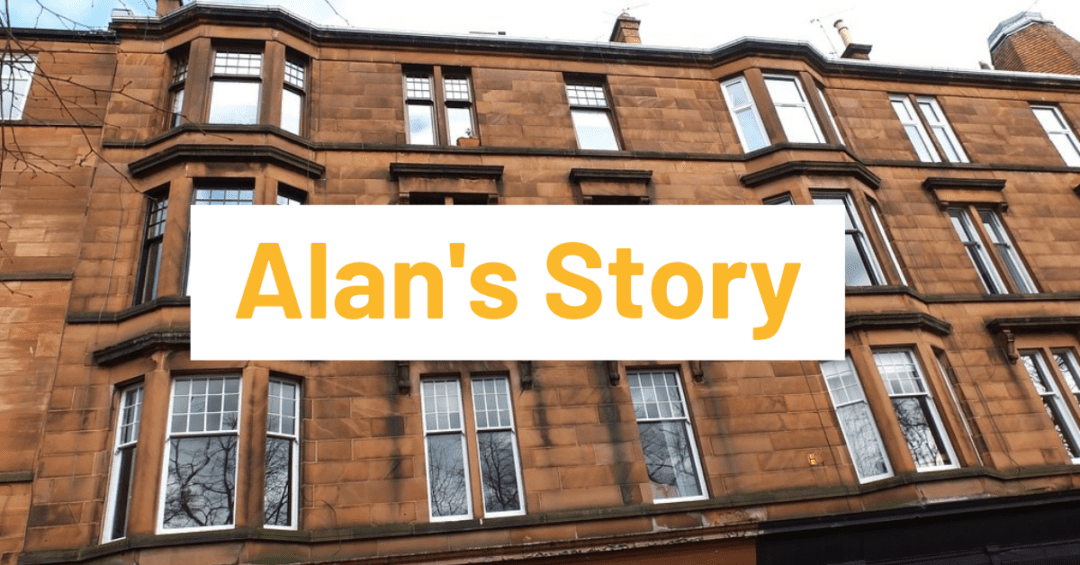 Alan became homeless after a relationship breakdown which came on the back of what he describes as “quite a traumatic 2-3 years” trying to get a mental health diagnosis. While he is grateful to finally have a diagnosis for autism and multiple personality disorder – “it’s a good thing because you can actually have medication that helps you to function quite normally” – his experience of the homelessness accommodation he was staying was very negative.

“You go from living quite comfortably in a family home to being in a shared space with people who have quite a complex array of issues, so it was really challenging. I was faced with the prospect of being stuck there for three years because the housing shortage is absolutely chronic, and obviously that in turn had quite a significant impact on my mental health as well.”

Thankfully, Alan was put in touch with Elke Ambrose, the Armed Forces representative at the local Citizens’ Advice Bureau serving the communities of Inverness and Nairn. Elke was able to help out with a number of different things – including referring Alan to Housing Options Scotland.

“It was Olivia Lindsay who got back in touch with me and she was great. Straight away she started sending me links to properties, one in particular that was in Bellrock Close that had become available, that was through one charity, she also put me in touch with Erskine who had a number of one-room apartments that were due to become available this year and then she also sent me a list of houses with Veteran’s Housing Scotland (VHS) which was brilliant. So I made applications to all three places.“

“Olivia’s support has been absolutely tremendous; I would’ve been absolutely lost without it. I had no idea where to turn, but she was an absolute wealth of information and support and checked in with me regularly as well which was great. It was great knowing that if I had any questions, I could phone her, so yeah, really first class.”

Alan had made up his mind that he wanted to come to Glasgow to be closer to his family and friends:

“My daughter is gonna have a baby this year, so I’m going to be a grandfather for the first time, but also aside from that, I have a really close relationship with my daughter, so I wanted to move back closer to her, and I have friends and other family around Glasgow as well.”

He applied to a Veteran’s Housing Scotland property in Glasgow and was in luck:

“The charity had told me that there were five people in for this particular property and of the five applicants they interviewed two people of which I was one and I got a very decision thereafter, the next day. So between Olivia giving me that information and me getting the house I’m pretty certain it was only a matter of three weeks.”

Finding a home has made a big difference to Alan’s life:

“It’s life-changing, you know. For me, it was absolutely huge to have a front door you can actually lock, because in the homelessness accommodation there’s no security at all. Getting back to a position now where I have my own roof over my head again, I have a nice house…it’s unfurnished, so it’ll take me two, three months to get it to how a house should be, but I’m absolutely delighted to have a roof over my head and a front door again.”

“When I first came in and had no carpet, no bed, no couch that was quite a daunting prospect, but I’ve enjoyed generosity from neighbours and also the Welfare Support Fund that Olivia recommended I try, so they helped me out with a bed, and a carpet, and a fridge and a washing machine. These are things that are not insignificant. So again, Olivia’s help was invaluable in getting that support. She also recommended approaching SSAFA [The Soldiers, Sailors, Airmen and Families Association] for things like carpets which I have done.”

With his accommodation sorted out, Alan can finally focus again on his personal plans and projects.

“My plan has always been to work back to self-employment. I’ve always been a creative person, so I have been writing a book and will continue to work on that. It looks at the criminal justice system in Scotland and exposes the different facets of it because it’s very archaic and not fit for purpose. I also have a wealth of resources I’m turning into online modules that people can access. That’s my primary focus, keeping my mental health in the best state that it can be. I couldn’t do any of that with the situation before, it was such a chaotic way of living.”

He’s also got a few tips for other members of the Armed Forces community looking for a home:

“In the first instance, if there is that military connection, do utilise that connection, whether it be through Citizens’ Advice Bureau or speaking to SSAFA [The Soldiers, Sailors, Airmen and Families Association]. Poppy Scotland are another good gateway, and obviously, I’d absolutely recommend Military Matters and Housing Options Scotland because the support has been seconded to none. As I said, the support was very compassionate, friendly and just first class all round.”