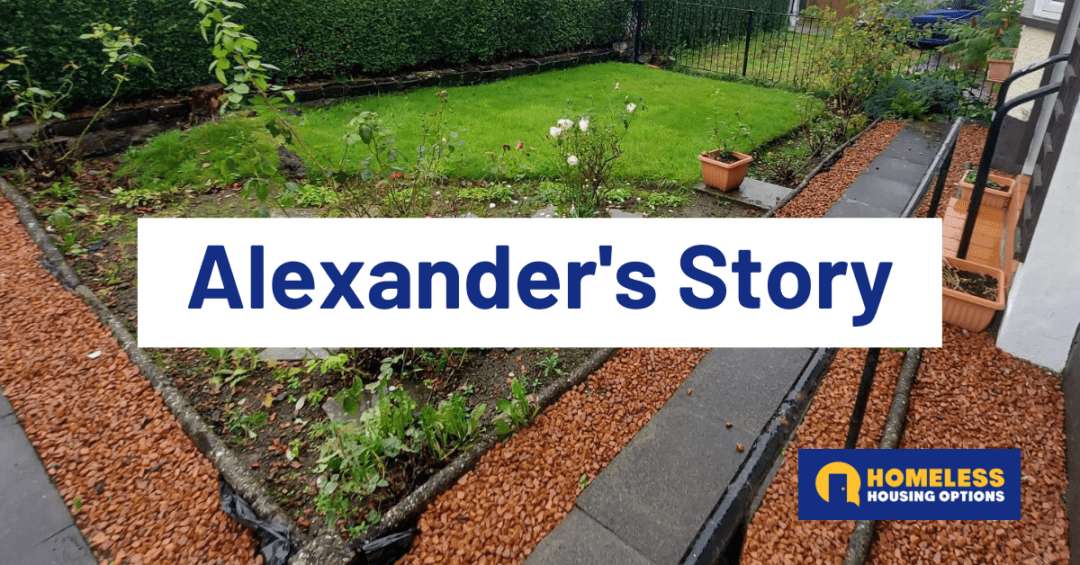 Alexander is an armed forces veteran who came to Housing Options Scotland for advice earlier this year. He had been sofa surfing on and off for almost 13 years and had been trying to find accommodation that was secure.

“I was sleeping between a couple of friends’ houses, and my brother’s house” he said. “But sadly, my brother died in December which narrowed my options.”

Alexander had become used to this way of life and had never managed to secure a tenancy of his own.

“That was the lifestyle I had fallen into. That was going on since I left the army 13 years go. I had a couple of relationships where I stayed with them for a few years, but I never committed myself to getting my own property.”

Alexander wasn’t sure if he qualified as being homeless: “There were certain weekends that I was having pitch my tent when I had nowhere to go. In my mind I always thought “I’m getting by” and never thought I was truly homeless.”

Alexander had been trying to secure his own tenancy for some time before he contacted Housing Options Scotland, and their Homeless Housing Options project. Due to strict restrictions in his place of work, he was not allowed access to his phone and so was unable to make calls to his local authority during work hours – and was having to take days off just to be able to access support.

“I was banging my head against a brick wall. It was really hard to get in touch with the council and they kept offering me bed and breakfasts.”

Hostels and bed and breakfasts were unsuitable for Alexander as he was working, and in financial difficulty – emergency accommodation was unaffordable. Additionally, due to his work being in the criminal justice system, there was a safety issue.

“I told them that due to my work that wouldn’t be suitable, and my safety would be put at risk there. A lot of the people in those places are people I work with on a daily basis. It didn’t seem to make any difference.”

“I got lots of advice and lots of help. The broker really went above and beyond. She was liaising with so many different agencies – she was speaking to the council, my local veterans charities. She really helped me out.”

The broker understood that he needed flexibility around when he could talk, and took the time to speak to Alexander outside of his work hours.

“It was great to have someone who actually cared. My broker was the only person who was consistently contacting me. Even at 8 or 9 o clock at night!”

The broker eventually became aware of an available property with Veterans Housing Scotland – and helped Alexander to make an application. He was successful and soon after was able to move into his new property.

Alexander would advise anyone at risk of homelessness to “reach out for help everywhere and anywhere you can. Don’t be ashamed to take help – you’re entitled to it!”

He says “My hopes are now that I can start to build my relationship with my son, now that I have somewhere I can have him stay. Not having to worry anymore about where I’m going to be staying next week, having that security, has really turned things around for me.

I can’t recommend Housing Options Scotland enough. I’ll always be thankful to them.”