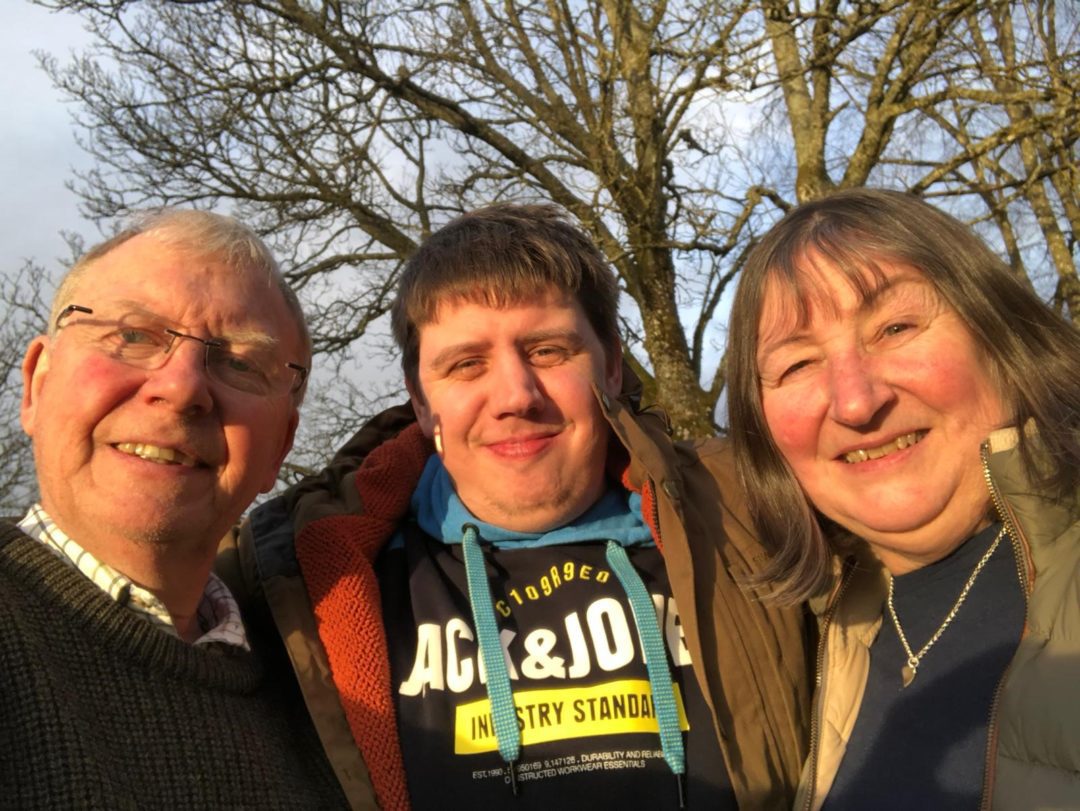 Sue contacted Housing Options Scotland for support and advice when her son, Robert, was to move from Sheffield to Blairgowrie. HOS Broker Susan was able to support the family apply for the LIFT scheme and see Robert purchase his own flat.

Sue’s son Robert was living in a shared, rented house in Sheffield. He was settled and with a good support package which meant that when Sue and her husband moved to Scotland, they knew that Robert was safe and happy.

It had always been in the family’s plans for Robert to move to Scotland at some stage, but things were taken out of their hands when Robert’s landlord decided to sell the property he was living in. Sue recalls:

“It was due to be a steady move but when the landlady decided to sell her property, we received 3 months’ notice that Robert was to be made homeless. That put the pressure on – Robert had to move. Although he had wanted to come up north and we’d been looking around, the fact that the decision was no longer Robert’s anymore really upset him. Anyone is anxious when moving and especially so if you’ve nowhere lined up to move to, but as Robert has mild autism and moderate learning difficulties, for him it was a double hit.

I’d already started looking at the private rental sector and council lists but he was 7500 down the waiting list so I knew I needed other options. We wondered about Robert buying somewhere – the stress caused with moving from one rental property to another was something we wanted to avoid. The first time Robert had to move flat he locked himself in and wouldn’t come out. We knew it would be better if we could buy.”

Just before Robert moved to Scotland, Sue’s daughter – who was living in Edinburgh – came across the HOS website and suggested Sue get in contact. Sue had spoken to several estate agents about if there were schemes able to help people buy property in Scotland, and to see what was on offer in the private rental sector, but she was having no luck. She remembers:

“I’d asked everyone I could think of but nobody knew of any sort of support for buying in Scotland so I thought that there probably wasn’t anything out there. Still, I filled in the form on the HOS website just in case and it said someone would get back to me within a week. Happily, someone got back in touch and said they’d get back to us with more information within 6 weeks. Again, someone did.”

The next steps in sorting Robert’s housing journey were made much easier for Sue and the family:

“The day you got in touch with information was the day we were in Sheffield helping to get Robert moved out. The timing was amazing – I’d just said to a friend that I was hoping something would come from this and it did. That was the most wonderful feeling because I was so stressed!

I got that phone call and Susan explained the options for us, including the option to buy via the LIFT scheme. She told me about the costings and how it would work and said she’d send me everything by email. She did that straight away and then put me in contact with Ian Haughey, an independent financial advisor. Susan asked me to keep in touch throughout the process and it all got sorted from there.

Ian was absolutely marvellous too – talk about holding your hand through it all! We had just bought our property the year before and gone through the same process. Even though it was fresh in the mind, it’s still such heavy going. Ian took all the pressure out of the move – including the LIFT scheme and linking everything together. Everything was sorted and I was just told what to do, when and how. It was absolutely fantastic!”

When it came to finding a suitable property, Sue, Robert and family knew what they were looking for:

“The key things were that the property should be in a safe area. Robert is vulnerable and I wanted him to be somewhere where he wouldn’t be frightened or worried about going out. We also wanted him to have access to amenities – to be in walking distance of the main shops in Blairgowrie and of buses to Perth and Dundee.”

In the end, Robert purchased a new build flat:

“The flat is lovely – it has an independent doorway and access and some outdoor space which is gravelled and easy to look after. It’s nice and spacious with a big lounge and 2 bedrooms, one of which we’re going to use as a day room for Robert to have his computer and bits and pieces in. Being allowed a 2nd bedroom via LIFT is really useful – it will make a big difference for us, especially initially. Robert is used to having support at night which he won’t have here. If that doesn’t work out, then we’ll have the option to get someone into the second bedroom at night.

The flat is just 8 minutes away from us so we are close enough to be on hand to help but far away for him to have his independence and do his own thing. Moreover, the new place is so cost-effective to run – particularly with energy; it’s got solar power! Compared to older properties in Scotland it’s nice and warm.”

“It’s exciting now that everything is coming together: sorting out the house, getting packages for support – all that takes such a long time and now it is finally done. This move was also about future-proofing things – I wanted Robert to be closer to his sister in Edinburgh when we’re not around. I would hate for Robert to have to go into a home. He doesn’t need that – he’s been in supported living for 10 years and this is the next step. He’s ready for this and that’s what he wants too. The flat makes it all possible.”

“The support from HOS was great – there was such a lot of detail. It was brilliant! I knew what I wanted when I was contacting estate agents but I couldn’t explain it to people – HOS gave me the words and information about LIFT to make it possible”