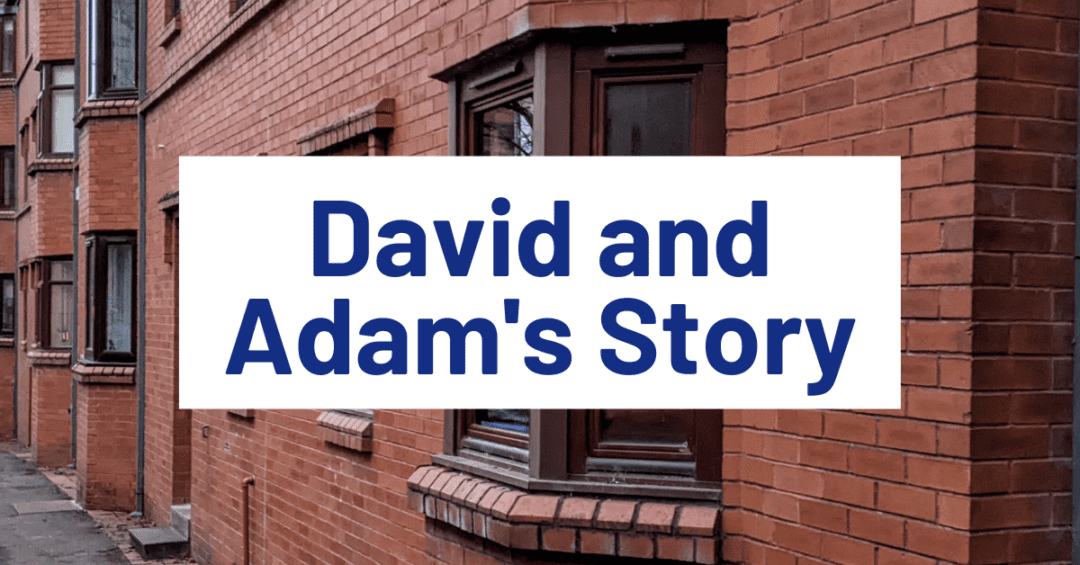 David and his wife were living in East Renfrewshire, with their son Adam living nearby. Adam has Down Syndrome, significant health conditions and was living in Supported Accommodation. With Adam settled living independently, David and his wife decided to downsize and move to a smaller flat in Glasgow. However, whilst in the process of moving, Adam was having difficulties with his mental health and  his accommodation was becoming unsuitable for his needs.

As David and his wife were in the process of moving, Adam had to live with them while they found alternative housing for him as nothing suitable was available in East Renfrewshire. David contacted the Local Authority in Glasgow, but was told that Adam would not be a priority for housing as he could live with his parents. Unfortunately, because they had downsized, the flat was too small for three people, and they really wanted Adam to have the opportunity to live independently once more. It was a difficult process, as David explained:

“Because we had moved into a new area, everything was different we had no contacts in the new local authority. In Glasgow, it wasn’t Housing Benefit to apply for, it was Universal Credit. And everything is online, you can’t speak to anyone.”

David’s wife had worked in the charitable sector, so she knew of Housing Options Scotland and suggested that David contact us. He filled out a ‘Get Help’ form and explained Adam’s case. As a last resort, David had the idea to buy a property for Adam and to rent it out to him as a landlord/tenant agreement. However, because David and his wife were both retired, they couldn’t afford to do this without rental income, so they needed to check that it was legitimate.

“Olivia our broker contacted David and explained the housing options available for Adam. Buying to Let to a Relative did seem like the best option; though it wasn’t the simplest.” Adam worked part-time, but would need Universal Credit to afford the rent. However, as a tenant can only apply for Universal Credit once they have moved into a property, there was a chance that the claim could be declined and Adam wouldn’t be able to pay his rent. Nevertheless, this was the best solution available and so they proceeded with the purchase.

Adam moved into his new accommodation,  Support for his day to day living was set-up and an application was sent for his Universal Credit. Unfortunately, the claim was denied on the grounds that it was a ‘contrived tenancy’: this term is used when a tenancy seems to have been set-up to take advantage of the benefits system. Having found a solution, this outcome was very stressful. However, Olivia had said that they would have a strong case to present should their application be declined. She explained:

“The family had made applications to social housing providers but were told there was no prospect of being allocated a suitable property any time soon. They searched for properties to rent privately for a long time, but again nothing suitable was available. Due to Adam’s learning disability, health conditions and mental health history it was essential for him to live in safe appropriate accommodation near to his parents, which they had as yet been unable to source despite their best efforts.”

David contacted HOS again. Olivia advised David to apply for a Mandatory Reconsideration, which needed to be applied for within 30 days of rejection. After seeking advice from our Benefits Expert, David was able to supply supplementary information along with a Letter of Support from Olivia, which detailed their situation: it was clear that this tenancy was the only suitable solution for the family.  Thankfully, the claim was reviewed and ultimately approved!

“I am very grateful to HOS for their help. They responded so quickly, and understood our situation. They had the knowledge and expertise to help us achieve a good outcome.”