Just over seven years ago Chris Fisher couldn’t imagine the amazing quality of life he now experiences. Chris went from being housebound for 12 years, to moving in to a house with level access throughout and the ability to go outdoors without much effort.

“It has totally changed my life.”

Chris, and his wife Julie, had previously lived in a small one bedroom house in which Chris was completely hospital bedbound to one room. Not only was Chris unable to visit other areas of his house, he was also unable to enjoy the outdoors that he loved so much, until he found Housing Options Scotland.

“We can’t express our thanks enough for all the help we received from Housing Options.”

Since moving in to his new home Chris is no longer captive. Day to day life has completely changed for both Chris and Julie. After all the years he was captive in his old house Chris now feels he has been born again.

With the assistance of Poppyscotland he received a van with a trolley lift which means he is now mobile and in the community. Chris has also been able to get an electric buggy bed which he cheerfully calls his “legs”. Because of these additional mobility aids Chris is now able to go out and about. He and Julie are now able to do things together that some people may take for granted such as attend church, go out for a meal, see a movie, go on wee tours, have a picnic, and go shopping. One of Julie’s main hobbies is gardening which was something that Chris was unable to join her in doing. After they moved in to the house they were able to put decking in so now Chris can access the outdoors and garden and they can be together.

“I remember the first time I got a snowflake on me.  After all these years, that was incredible.”

An additional highlight to his life altering change is that Chris is now able to have a social life and has recently been taken on as an elder at his church and is a member of the British Legion. He is also able to have people come to visit since there is now plenty of room in his house.

“I am able to do things that most everybody else takes for granted.  It’s absolutely amazing.”

Life has not only changed dramatically for Chris in the new house, it has also positively affected Julie. The house has a second floor which includes a sitting area, shower, and bedroom where she can go and watch television, read, or have a rest. She feels a lot more relaxed by having her own space. Both Chris and Julie believe it is important for her to have a place for her to get away so that she can relax properly.

“The house resulted in a win-win situation”

Chris and Julie are aware of their good fortune and have been focused on making sure they give back as much as they can. Because he received the van from Poppyscotland, Chris attends events for them. He wants people to see that the money they donate benefits someone in the village. He feels just as strongly about Housing Options Scotland. Chris has attended HOS events so he can tell his story and help support others in a similar or worse situation.

“Housing Options Scotland’s support was 200%.  Without them it wouldn’t have happened, no doubt about it”

Chris has also been keeping busy working on furthering his education. He has two years left in school and is working hard toward his final degree. Although he admits that it has been tough work, he says he is happy to be closer to his finishing college and moving forward.

Life for Chris now has no resemblance to life before Housing Options got involved. He is no longer imprisoned or depressed. Chris is able to realize his dreams, have amazing experiences, and share them with his wife. The top three adventures on Chris’ wish list are to visit Ireland, go up in a plane with his wife to see the Northern Lights, and go out to sea.

“It’s been quite an exciting life so far.  I wouldn’t have been able to do it if it wasn’t for having this place and HOS helping.  I’m very grateful” 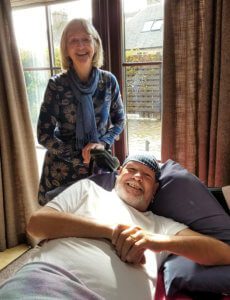