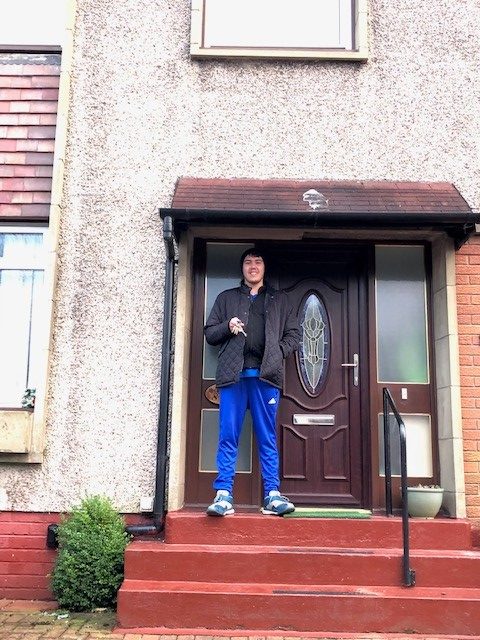 Joan contacted Housing Options Scotland for help to support her son Alex to live independently. After 15 months of exploring different housing options, Alex is now settled in a new home which the family purchased in September 2020.

Alex was 16 and keen to live independently as soon as possible. He had been on the housing list with the local council for a while but nothing was coming up for him. Despite his age, Alex’s mother and guardian, Joan, was in touch with a private landlord who agreed to take Alex on as a tenant, given that he had 24 hour support on hand through the council.

Though it was good that Alex was living independently, Joan had some concerns about Alex’s living situation:

“The private let was a 2-bedroom upper floor flat with no garden. There was a car park at the back of the house which meant that Alex was meeting people he shouldn’t have been when he was coming/going from the flat. He was vulnerable, so we were concerned about where he was living.”

Ultimately, Joan knew that she wanted to buy somewhere for Alex, but she wanted to check that this was going to be the best option – that was when she made contact with Housing Options Scotland (HOS):

“I heard about HOS when I attended an 8-month programme with “In Control Scotland”. It was a course called partners in policy making, and was all about exploring ways to get the best possible outcomes for people with disabilities.”

“We had been trying to get Alex’s guardianship changed to allow us to buy a home for him as we thought that would be the best option for us, but we wanted to ratify this really, and to get some further advice from the experts.”

One of the first things which the HOS team organised was a group meeting where all different stakeholders came together to discuss Alex’s case, and to set out what sort of a resolution everyone should be working towards achieving. Joan explained:

“We met with different people to come up with an individual personalised plan for Alex. We contacted the local pub who knew Alex and were happy to host us for the meeting and everyone met there to discuss things.”

“In that meeting we discussed that Alex wanted a house with his own garden and some outside space. He doesn’t like to be around too many people and he confirmed that he wanted to stay in Buchlyvie where he was based already.”

“The planning went really well and the feedback was exactly what we thought – it would be best for us to try and buy something for Alex.”

Making the plans a reality turned out to be a long process, with multiple setbacks getting in the way. The family had trouble sorting Alex’s guardianship, for example:

“We knew we wanted to get Alex’s guardianship changed so we could buy a house for him. Just before he was 18, I started to make arrangements in order to make this happen. I checked with the people who had done his original guardianship that that would be okay, and they advised everything was good to go in terms of us being able to buy somewhere. I then started to get quotes for conveyancers, and it was only then that they said there was a problem. I didn’t have the rights to buy the house for Alex after all. At that point, everything ground to a halt.”

As well as those legal issues, Joan had trouble working with the council to get things in order. Luckily, she had the support of Housing Options Scotland to help navigate things:

“I met Moira [Housing Options Scotland CEO] a couple of times and she was really helpful just generally in terms of issues we were having with the council. She came along to one of our council meetings to see where they were at with regard to what we were trying to do. It was really beneficial to have someone there at the meeting, even just to see the nonsense we had to go through to try to achieve better outcomes for Alex!”

After some time, everything started to look up:

“Once lockdown happened, everything went pear shaped again as we couldn’t do anything to get a house in the right name. That meant Alex was staying in his flat through lockdown which was less than ideal.”

“As things opened up again a 2-bedroom house came up in the village, perfect for Alex. At this point, we still didn’t have the guardianship sorted though, as the courts weren’t sitting for civil matters.”

“We were trying to think about how we could buy the house for Alex – we looked at buy to let, we looked at buying it as a second home but these weren’t options for us. Eventually, it came to us that the only route left would be for us to re-mortgage our own house to get the funds to pay for Alex’s.”

Jil and the Housing Options Scotland team were around to support Joan and the family with this change of plan:

“Jil kept in touch throughout the process to see if there was anything else she could help with. She helped us to focus on putting together an application to the DWP about getting Alex’s housing element of Universal Credit maintained, and advised us about the likely questions they might have for us about that. She also checked over some of the information we’d prepared to answer any of their questions which was very helpful.”

Some 15 months down the line from the initial meeting the family had with the HOS team and others, and Alex is now settling into his new home. It’s been a big positive step for Alex:

“The house is better because it’s off the main road so much quieter. It’s a project too, so there are things for him to do to take care of it and improve it. Since moving in, he’s been helping to lay floors to get it how he’d like it, and it’s been a good opportunity for him to develop his skills.”

“The house has also made Alex a bit more motivated  – it’s been easier to get him to look after things better by saying “it’s your house, you need to keep it to a good standard” – it’s a bit harder to do that when the flat is owned by someone else!”

Looking to the future, Joan is excited about what the property means for Alex and the family:

“I feel Alex is safer – he can go outside now without us worrying and he has got some fantastic neighbours which money can’t buy!”

“The improvement in Alex’s mental health has been brilliant– just to have his own space and to be able to go outside has been immense. Moreover, the house has several sheds in the back for him to practice his woodwork in. This is something he has taken up recently with a local charity – he has also started 1 day a week paid employment as his first job, and he gets 1 day a week of training in woodwork too. That all happened the same week he moved in so it’s been really exciting to see, and great timing too.”

“Ultimately, we do potentially want Alex to take over the mortgage himself, but we need to be careful about that and be clear in our heads that it’s the right thing to do at the time.”

Reflecting on the process as a whole, Joan has some final pieces of advice for anyone in a similar situation:

“Firstly, before you do anything, make sure that you sort any issues regarding  guardianship or power of attorney – that way you can avoid disappointment and wasted time. Get a conveyancer to look into it, and explain exactly what you need from the outset – show them the documents and go from there. It’s really important to check that you have the ability to buy the house – that’s the most important lesson we learnt.”

“Also, try and agree realistic timescales with the person you are supporting! Alex was impatient and we had to manage that – he turned 18 in June and in his head, he thought he’d be settled in easily by September. We had to manage that and explain why that was unlikely. Initially, we thought that 6 months was a realistic timeline and that we would have him in for Christmas 2019 but in the end with the setbacks and coronavirus, it’s been more like 15 months (!) overall”

“It is great to see such a positive outcome for another one of our clients, and Alex seems to be absolutely thriving in his new property.

As Joan mentioned, it was really great having all of Alex’s support network involved from the very beginning of the case. It allowed everyone to have their say, but always focussing on what would be best for Alex. Although there were a few bumps in the road, the family got there in the end. To hear how well Alex is doing in his new home is fantastic!”