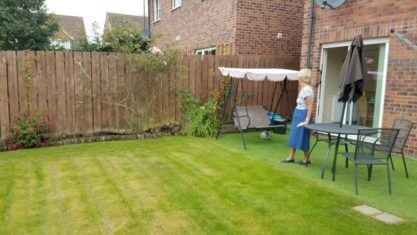 It has been eight years since Anne Harkes’s first contacted us to assist her with locating a house for her now 45-year-old son, Trevor. I met with Anne at Trevor’s house to learn how life has changed for her and Trevor since he moved in to his own house after getting help from us. Anne had prepared sandwiches and tea for our meeting, and we sat in the kitchen and discussed the changes that have occurred in the last five years since Trevor moved into his house.

As we began to talk Anne said that Trevor was out for the day as is typical for him. She said he likes to be active and is usually out and about from morning until late afternoon with his day worker. Anne explained that every six months there is a review where SHARE Scotland and his care team discuss different activities for Trevor to do, something she had a challenging time with when he lived at home. Anne felt “less and less able to think of things for him to do or places to go.” Trevor’s current team is a younger group of people which Anne believes “broadens his life”. This also allows for more help to brainstorm ideas to keep Trevor active and experience new things.

In the past 5 years Trevor has been busy with activities such as trampolining, dog walking, moving about at the afternoon karaoke hall, assisted ice skating, shopping, and even cooking where he will do chopping hand-over-hand or mixing. When asked what else has changed for Trevor, Anne thoughtfully states:

“What I think has changed is that he is no longer ‘mum’s boy’.  He seems a wee bit more mature with friends of his own.”

She is also happy that Trevor has more friends. “We have members of staff that are absolutely wonderful, they’re so caring. I know they’re paid workers but to him they’re friends, they’re doing for him what friends do. They enjoy working with Trevor and I think Trevor gets a lot out of that.”

Now that Anne is no longer full-time carer for Trevor she says that the biggest change for her and her husband is that they also enjoy new activities and are quite active. They now have the ability to go off and do what they like. In Anne’s words, they are “footloose and fancy free”.

“After 40 years of caring hands on it feels good.”

“When Trevor was young we would get only so many nights respite from the local council. I fought with them to get a full fortnight. They only gave weekends and a week.”

Once her husband received retirement and they got Trevor settled in to his house they were finally able to get the respite they needed.

“We started going long haul holidays and have travelled round the world.”

Anne acknowledges she sometimes feels guilty that she has this freedom. One thing that has made it easier is the solid communication they have with staff and through Trevor’s older brother, Gavin.

“My older son is still at home and has Trevor visit when we’re gone so the routine is kept up.  In the evening when Trevor’s settled in his bed the staff phone home. Gavin then emails us so that I know daily, wherever we are, what has occurred.”

Anne readily admits she thinks of Trevor daily.  No matter where she is, Anne says

“He’s never out of my head.  I still want to know every little thing; what he’s had for lunch, how he’s behaved himself, has he smiled and chatted.  I don’t think that ever leaves you.”

Since they opted for joint ownership and purchased the house with another person I asked Anne how the housemate relationship is going and how that affected Trevor. She admits she is not sure how Trevor perceives his housemate due to his profound learning difficulties however she believes the relationship is working out very well.

The purchase of the house, with the assistance and guidance of the Housing Options Scotland team, went smoothly however there have been a couple of issues that have come along the road since the guys moved in. Even with those issues Anne insists:

“There have been no major problems.”

What she has found surprising about the move is how good the staff are. “The staff are really good. I expected him not to be neglected, to be well cared for, to be well fed, be well turned out but they go above and beyond. They don’t sit around and watch telly, they see what it is Trevor needs and it’s done. It’s done with a caring attitude. I don’t expect anyone to care for Trevor as much as we do but I can see they care deeply.”

While there has been a lot of change, Anne says there are still some things that have not. “Life is much the same. We still live in the same house. We still see Trevor quite often and include him in our lives. We take him on holiday in the summer for two weeks which has always happened. He spends 2 weeks at Christmas with us. He still sees his aunties and cousins. My friends and neighbours still ask about him.”

I asked Anne what she felt she has learned from this experience and working with us and she replied,

“I have learned there are many options available for housing.”

“Without the information and help of HOS I don’t know that we would have been able to afford a house for Trevor on our own without the housing association buying in. The other idea is not just about affording the house, it’s that it’s not fully ours and someone else is responsible.”

In addition, Anne offers this wisdom to those who are in similar circumstances,

“Do it sooner rather than later. You need to have a practical view; you’re not going to live forever. I don’t think moving Trevor in here has made his life worse, it’s made it better. It’s made our life better. It hasn’t split us up.”

As a final thought Anne has this to say about how Trevor has benefited from getting his own house through the assistance of Housing Options Scotland.

“I don’t know how much Trevor knows but he does know he has two homes. When I am driving him to my house, as we turn off the main road he’s reaching to take his seatbelt off. The same thing happens when I take him to his house. As we turn the corner towards his house again he’s at his belt looking to undo it. He knows he’s going there. Despite his brain damage, he has an understanding that he will be fed and loved in both places.”

“Isn’t he lucky to have two homes and two groups of people who care for him!”