Danny had been living in a two-floor property in Wales for twelve years, with his bedroom and bathroom on the top floor, and his kitchen and living room on the bottom. After having gone through several operations on his left foot, he had increasing mobility issues that made climbing stairs a difficult task. Additionally, Danny suffered a mini-stroke which caused him to worry about living on his own.

Danny had many friends in Wales, but didn’t have anyone to call in the middle of the night with these worries, which was causing him to feel isolated. All of this was having a negative impact his mental health, so he decided to move closer to his daughters, who both lived in Edinburgh.

Danny found Housing Options Scotland (HOS) online and got in touch with CEO Moira Bayne about his situation. He knew that he wanted to start by looking at social housing developments in Edinburgh, so HOS were able to help by making phone calls to people at Edinburgh council, as well as housing associations. This was difficult for Danny to tackle on his own, partly because he was not yet accustomed to the Scottish accent, and because it can be an overwhelming task for someone with limited housing knowledge.

The team at HOS also suggested that Danny start a weekly blog (which he called ‘Dogfish Dan’) to share his personal experience with finding a new home. This alone was a huge relief because it made him look at his problems objectively. Danny says that “by taking over worrying phone calls and enquiries, and by allowing [him] to write this blog” HOS helped him “mentally and psychologically a great deal.” 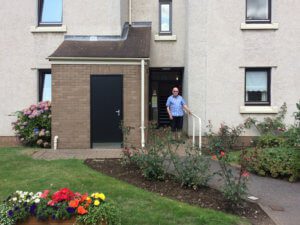 Even though he was getting the help he needed, Danny had trouble finding a place to rent through social housing, and felt that he needed to adjust his expectations quickly because walking up and down the stairs was getting increasingly difficult. He decided to put his flat on the market, and began looking into buying a property in Edinburgh. During the process of selling his flat, Danny was able to move out and house-sit for friends in Wales as a way of having a place to stay. However, after house-sitting from place to place until Christmas, he began to feel insecure in having no roots. Danny started the process of contacting developments again, and one responded saying that they still had no flats to buy, but luckily one had just come up for rent. After having his daughter check it out and confirm that it would be suitable for him, Danny came up to Scotland as soon as he could. Pedro from the Housing Options Scotland staff was even able to help him settle in by taking him around on a bus tour of Edinburgh.

Danny is now living in a one-bedroom flat that is all on one level. He is very pleased because “it has all that [he] needs, is just the right size, and most importantly, is in a perfect location.” He feels that he has total independence, while also having the support and sense of community that he wanted. Danny has found this support system both with his family and with his new neighbours, who organize coffee mornings and garden parties for everyone in the building to socialise frequently.

Danny’s new flat is also conveniently located near a bike path, which enables him to travel without any pain to his foot. He makes use of this by cycling to visit his daughters as often as he can (who are both only a twenty minute cycle away), and cycling for sport with the ‘Ageing Well’ program every week. Being close to the city also enables him to participate in the musical activities that he loves, which he does by taking ukulele lessons in town, joining vocal jazz workshops, and attending many of the gigs that Edinburgh has to offer.

Danny would advise those who are on a similar housing journey to prioritize their main needs, but to always be willing to adjust their expectations. It may take quite a while, and quite of bit of effort, but it is worth it to find the home that is right for you.