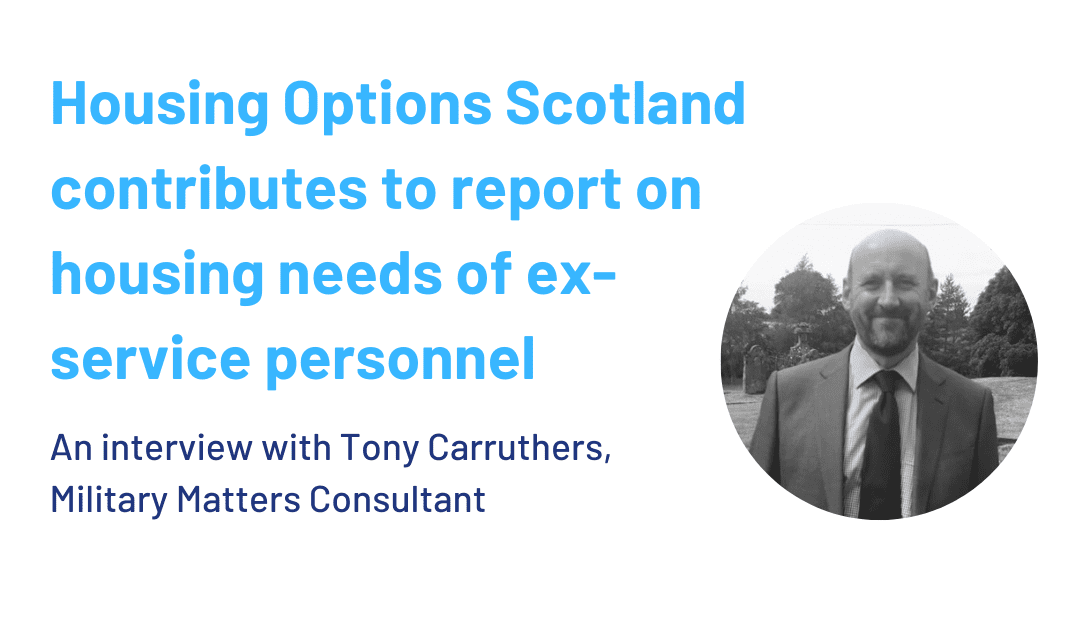 In the past two years, Housing Options Scotland’s Military Matters Consultant, Tony Carruthers, has been closely involved in a UK-wide research study investigating the housing challenges of ex-service personnel and their families. The final report, titled ‘Working Together to Meet the Housing Needs of Ex-Service Personnel: Examining the Challenges of Transition and Collaboration’ and authored by the University of Stirling’s Dr Steven Rolfe, has now been published! We spoke to Tony about the report and its implications.

Can you explain what kind of housing challenges ex-service personnel are facing?

The challenges are broadly similar to anyone who is looking for accommodation, but the main differences are that ex-service personnel and their families may have been living in a number of different locations, supported by the service community and then suddenly find that they no longer have that support. They are less likely to know who to approach and are not used to dealing with local authorities, don’t understand enough about the local housing markets where they want to settle or, if they are struggling with other issues, don’t know enough about the support networks that may be able to help them with their accommodation needs. In the report Dr Steven Rolfe points out examples of good practice where local authorities, service charities, the Ministry of Defence (MOD) and others provide information and advice and can help signpost service leavers and their families to get the right information and prepare for Civvy Street. Ex-service personnel are used to dealing with military culture and bureaucracy and sometimes it can take time to adjust and navigate through civilian bureaucracy when it is unfamiliar and on a larger scale perhaps then folk are used to.

How were you and Housing Options Scotland involved in the research?

Housing Options Scotland supported the University of Stirling through our knowledge of the veterans housing community in Scotland and further afield, our contacts within the MOD and organisations which support currently serving personnel, such as the Forces Families Federations, and our knowledge of what the broader agenda is regarding services accommodation. A new scheme called the Future Accommodation Model is being rolled out in 3 trial areas, including the Royal Navy base at Faslane, so Military Matters have been engaged within the forces and ex-forces community for some years and we were able to open doors (housing joke there….) for Steve when he needed to find contacts and make connections across the UK. That helped Steve pick case studies which covered different aspects of service and ex-service life, rural and urban and across the various branches of the armed forces.

I helped establish and facilitated a Research Advisory Group, made up of people connected in some way to housing for ex-services personnel. That included representatives from large housing organisations, the MOD and academia. This in turn helped Steve as he heard firsthand of current issues and was able to “sense check” some of his work as he went along.

What recommendations would you give to ex-service personnel whose housing needs aren’t being met?

The key is preparation. Making sure that when you know you are leaving the armed forces to plan well ahead, use the resources and connections that you have at hand and then start looking at your options. Don’t feel embarrassed that you need to ask for guidance, the world of housing is complex and there are organisations who can support you if you know where to look, such as Housing Options Scotland and their Military Matters project in Scotland. In many ways, ex-service personnel are lucky in that they can access support from organisations whose primary function is to ensure that they don’t feel left behind or isolated. Research the area you want to live in, because for many who live in services family’s accommodation they are protected from the real costs of renting or home ownership so ensure that you have done some financial planning and start putting money aside for your own property early if you plan to either leave the armed forces or live in your own property while still serving. Again, the military are increasing the amount of life skills training and awareness they offer, make the most of it.

Can you tell us what the housing sector can learn from the report’s findings?

The sector is usually good at working together and collaborating, the situation this year has helped focus organisations on the importance of working together and that should continue. Steve’s report is complimentary about how positive outcomes are achieved when organisations work in a person-centred way putting the ex-service person and their family at the heart of what they do. One of the other issues that came up was a need for better data sharing between organisations as some of the individuals Steve spoke to in the case studies said they felt frustrated at having to tell the same story to people over and over again. This in turn led them to lose faith in the system they were trying to navigate through and meant they felt they were just a number in the system.

The Armed Forces Covenant states that ex-service personnel shouldn’t suffer any detriment through their service, and this has been translated into positive action by local authorities in the way they deal with those leaving the services, so the direction of travel is positive, we need to keep it that way.

We thank Tony for this interview. You can read the whole report here: https://www.fim-trust.org/wp-content/uploads/Working-Together-Report-FINAL-published-version.pdf. If you are a veteran struggling with your housing situation, don’t hesitate to get in touch: https://housingoptionsscotland.org.uk/get-help/.